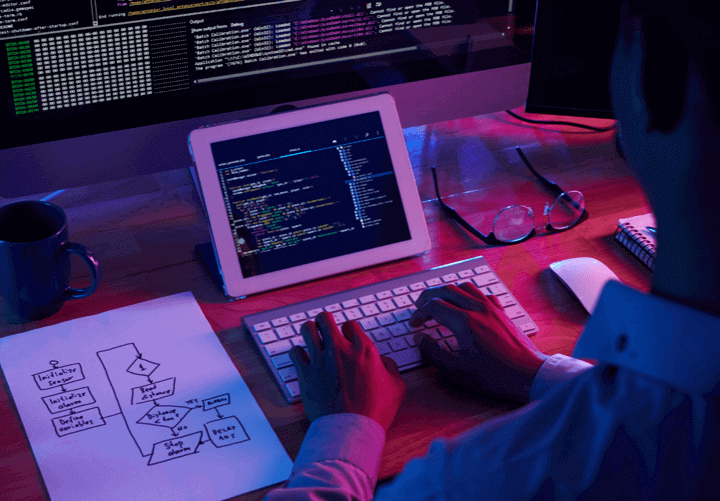 Determining the Best Chatbot Development Framework for Your Business

For many enterprises, chatbots have become integral to smooth customer service and efficient global operations. In fact, according to Gartner, more than 85% of customer interactions will be processed by chatbots by 2020. But despite the myriad benefits of building and deploying a chatbot for business, the multitude of development frameworks out there can confuse and bewilder the novice entrepreneur looking to create a conversational UX.

What platform works best if you have no coding background? How do you train a chatbot to follow and respond to complex user needs while delivering an above par user experience?

This article explores the features along with the pros and cons of different chatbot development frameworks so that you can pick the right one for your business needs. Without further ado, let’s dive in!

One of the most intuitive and comprehensive chatbot development frameworks in the industry, A.ware is built on six intelligent engines that drive the entire chatbot experience:

The platform has advanced NLP and machine learning capabilities, and is the only Conversational AI platform to be featured on the SQuAD 2.0 leaderboard. A.ware has pre-built industry and functional AI models, which not only reduces implementation time but also ensures the bot has superior accuracy from day one. It also offers a zero-coding environment, enabling even business users to build an intelligent virtual assistant with no knowledge of software coding.

AI bots built using this platform can be easily integrated into on-premise, cloud, and hybrid environments. Enterprises are not required to tie-in to a specific cloud platform - giving them the freedom to choose. A.ware offers pre-built connectors, using which the bot can be integrated with a wide array of enterprise tools. The NLP-based bot built on A.ware can then be deployed on any channel of user interaction, including websites, mobile apps, voice assistants, enterprise communication tools and social media channels, among others. The built-in analytics dashboard allows enterprises to derive actionable insights from bot data.

A.ware currently handles over 100 million queries a month with an industry-leading average accuracy of over 95%. AI-powered and NLP based bots that are built on this platform can not only address user inquiries but also perform transactions, based on the use case.

Watson Assistant is built on a neural network that uses a processing framework to understand and learn conversational cues. The platform also offers software development kits (SDKs) that allow chatbots to be built and integrated using Java, Python, Node, iOS, and Unity.

Originally conceived to compete in the popular game show Jeopardy!, IBM Watson is used extensively in diagnostic medicine, specifically in cancer research. The platform also finds extensive use within customer support in the banking and retail sectors.

Released by Facebook, Wit.ai is an open-source chatbot development framework that can process a dizzying array of languages from Albanian and Lithuanian to Tamil and Vietnamese. Advanced voice interface features make Wit.ai a useful tool when building bots that are specific to wearables, small devices, and home automation, where a hands-free experience is considered desirable.

Additionally, the platform allows developers to upload their own data to act as a foundation for conversational interaction within any given use case. However, such data is shared with the entire Wit.ai ecosystem, in a bid to exponentially grow the system’s natural language processing capabilities.

While it’s quick integration into Facebook Messenger and ability to create chatbots that speak in nearly every human language makes Wit.ai perfect for global customer support functions, the open-source nature of the framework restricts use cases where sensitive information is concerned.

Originally launched in 2014 as API.ai, Dialogflow is a chatbot development framework by Google that is configured as a Google service. This means that agents and developers can connect to the platform via Google’s Cloud Functions or via an on-premise conduit.

As a Google product, Dialogflow uses Google’s Speech-To-Text algorithm to turn voice commands into readable data and also offers an in-line code editor, allowing developers to quickly and efficiently execute code-related tasks when building a chatbot. The platform’s use cases are further extended via machine learning algorithms that help your chatbot quickly learn and adapt to the specifics of a given use case.

One of the powerful bot-building platforms out there, SAP Conversational AI offers a simple user interface and intuitive, code-free tools to help you build NLP-enabled chatbots. The platform supports over 50 languages and promotes chatbot creation through a four-step process - train, build, connect, monitor. One of the most attractive aspects of this platform, especially for enterprise users, is its seamless integration with the entire SAP software suite and its ability to create rich conversational experiences for both enterprise and consumer-facing functions.

Currently, SAP Conversational AI is largely being used to fill customer support and lead generation roles, and to boost enterprise efficiency via its Digital Assistant offering.

As an open-source tool, this platform offers a series of templates to get you started on your bot-building journey. These templates range from a basic data collection service (FormBot) to the more advanced Language Understanding bot that leverages Microsoft’s LUIS NLU package to drive intelligent conversational experiences. That said, Microsoft Bot Framework is certainly not for the casual bot building, since it requires programming experience to effectively deploy.

The platform supports automatic translation for a few languages, SDKs for Node.js and .NET, and REST APIs to integrate with popular messaging and CRM platforms. Unique to Microsoft Bot Framework is the availability of both standard web bots and serverless bots, with the latter running over Azure Functions. Additionally, the popular Cortana API can be leveraged to give your chatbot voice capabilities.

Based on Python, RASA is an open-source, NLP technology stack that helps developers create highly intelligent chatbots using probabilistic modeling instead of the usual flowchart-based approach.

Instead of relying on if/then logic structures, RASA deploys machine learning models not only to recognize entities and intents but also to determine the flow of conversation. This makes RASA a chatbot developers’ dream when building highly sophisticated conversational experiences that continuously evolve without the need for manual intervention.

Unfortunately, the same richness and complexity make it unsuitable for non-technical users or for organizations looking to build simple, rule-based bots. RASA NLU can be used to build both voice and text-based bots and integrates with most messaging channels via API.

As one of the most widely used open-source platforms for Facebook messenger-based chatbots, it’s no surprise that over 360,000 bots have been created with Chatfuel. Besides a centralized platform on which to develop conversational AI experiences, Chatfuel also offers a system of conversational rules that can be defined via a creator dashboard and a limited NLP system (based on phrase recognition) that can be enhanced via integration with Google-owned Dialogflow.

One of the core benefits of this platform is the simplified editing tool sets that give users the ability to design chatbots without any coding experience. Other key features include support for over multiple languages, built-in analytics and a host of plugins for integration into Facebook, Twitter, Dropbox, Google, Bing, JSON API, and Live Chat, to name a few.

Like Chatfuel, ManyChat too offers an extremely intuitive and user-friendly bot-building system, that requires zero coding experience. Being able to quickly merge with SMS, email, CRMs, and major messaging platforms via zapier integration is a plus, as is the ability to schedule targeted campaign messages by timezone. Another positive is the platform’s bot cloning function, which allows you to duplicate entire bots in addition to conversations, intents and messages across different bots.

But unlike many platforms discussed here, ManyChat does not feature NLP and relies on manually inputted keywords and if/then logic to fuel its interactions with users. This is a critical issue in today’s chatbot arena since NLP is quickly becoming a basic standard for both premium and lower-tier conversational AI platforms.

Started in 2008, PandoraBots is one of the oldest and most widely used chatbot development frameworks out there, hosting over 250,000 developers within its community.

One of the key features of PandoraBots is its use of Artificial Intelligence Markup Language (AIML) - an open-source language that developers use to build bots from scratch. The great thing about AIML is that its open-source and developers can access the underlying code, which offers enormous flexibility in the kinds of bots they can create. The disadvantage lies in that developers need to learn AIML to code an intelligent bot, instead of using pre-configured machine learning tools. This makes PandoraBots great for organizations that have the money and resources to build bots for very specific use cases, but harder for users with no coding experience.

The platform also offers an NLP engine that can be accessed via API and PandoraBots Playground - and sandbox-style bot testing environment. Integration with PandoraBots is fueled by SDKs in Java, Ruby, Python, PHP, Node.js and Go.

With a built-in Natural Language Understanding (NLU) engine, AgentBot enables developers to create a truly conversational experience. The platform was created by Aivo, a premier AI solutions firm, and was built with the Latin American market in mind so it understands English, Spanish and Portuguese. One of AgentBot’s most lauded features is its machine learning capabilities - when combined with a long-term memory module, this allows the chatbot to remember customer messages, continuously learn from new interactions and even pepper conversations with emojis for a more natural language experience.

The platform offers integrations into any CRM, ERP, messaging channel or 3rd party application via APIs and Zapier integration. AgentBot has largely been used within telecommunications, BFSI, and eCommerce to provide 24/7 customer support, and offers quick integration into ZenDesk, Hubspot, Slack, and other CRMs.

Pypestream was launched in 2015 as an AI-backed conversational UI that is largely aimed at marketing and sales, customer support and employee services. Given that the platform was created using Amazon Web Services, you can expect a very high degree of security in addition to GDPR, PCI and HIPAA compliance built-in.

Blending both rule-based and statistical NLP frameworks, Pypestream offers a comprehensive set of self-service tools to help you build the perfect interactions without a coding background. In terms of integrations, open APIs are used to connect with Live Agent platforms like ZenDesk and Salesforce, as well as key messaging channels and even backend systems to facilitate eCommerce billing and transactions.

However, Pypestream does not currently offer voice or speech-to-text capabilities, although it does come with a single-pane-of-glass analytics dashboard that lets you view bot performance in real-time. Currently, the platform has been used to build conversational UX for Pampers, Oral-B and Royal Carribean, among others.

Although building a bot with FlowXO may seem easy once you’ve laid eyes on their elegantly designed UI, it can quickly get very complicated. The design process is built around ‘flows’ which can be defined as potential conversation responses. After building a series of flows, you can then apply conditions to these sequences, so that the bot distinguishes between various conversational cues and steers the interaction in the appropriate direction. However, while this approach works great for simple, rule-based chatbots, it can be very complex to work with when you’re looking to build more intuitive customer experience.

Currently, FlowXO integrates via API with Facebook Messenger, Slack, Twilio and a host of web-based apps that are designed for both consumers and enterprises. Although the platform does not have an NLP engine, it integrates with Dialogflow to better understand and process customer interactions. And unlike many of the platforms discussed here, FLOwXO does not allow users to build voice bots.

As chatbots increase in popularity and as new and more complex AI frameworks emerge, there’s no doubt that chatbots will eventually emerge as a critical business tool - one that lays the foundation for greater efficiency and enhanced customer experiences. While this rapid growth is likely to spawn hundreds of new chatbot building platforms, finding the right framework for your specific business needs is critical to getting the most value out of your conversational UX.